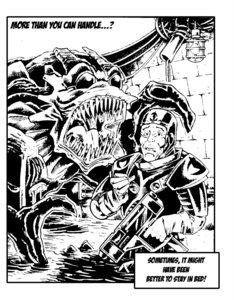 But why would you want to have them? Because they provide a neat and uniform way to describe the effects of skills based on the skill of the user. E.g. the jumping skill (if it existed) might allow to jump 3 yards plus (20 inches times the skill modifier). Now Gaia Gamma will not include such a fiddly skill, but it's easy to see how this could be used to find results for money earned by performances in taverns, how the time required to fix a machine could be calculated (base time plus machine complexity minus the skill modifier) and so on. So far these ideas are preliminary since I have one specific other use in mind that I will elaborate in one of the next posts.

Before closing for today here is the table showing the modifier for a given score (the so-called universal modifier table or UMT for short): 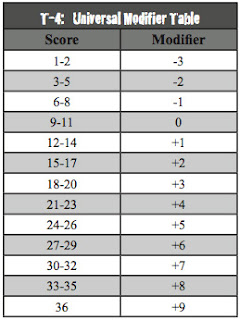 Whether the above level of detail survives the design phase in this blog will have to be seen. Till then let me know your thoughts.
Posted by The Creator at 11:42 AM