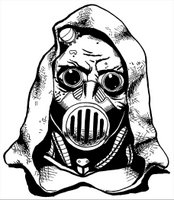 This morning I finished the section on mutated humans. While writing it I noticed that mutated humans probably are the baseline of the game as their section is going to be the shortest.

Mutated Humans (abbreviated as MH) probably in some respect are the truest children of the Ancients as they “enjoy” their full legacy. Strangely altered by the bionuclear weapons of the Final Wars they possess abilities that might by far surpass anything ordinary humans ever dreamt of being able to do. But at the same time they pay a high price - physically and mentally altered mutated humans no longer seem to be one race. They vary in appearance and many suffer from crippling deficiencies that haunt them all their lives. Nonetheless mutated humans band together in tribes and communities to rebuild the world and accept the legacy left to them. They abide by the following rules:

That's it. As they will be the mutation powerhouses I did not see much need to other special abilities.
Posted by The Creator at 6:17 PM