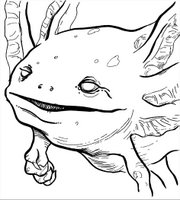 Gaia Gamma will make extensive use of so-called mutational skills. For each mutation that might allow for some variance (from telekinesis over flying to death field generation) there will be a skill. The skill will have major effects on actual game play.

For some mutations a skill roll will be required to activate them. Thus the skill will be directly used. For most mutations that contain some kind of variable (e.g. the amount of protection they provide, the range at which they work, the damage they might cause) the mutation skill modifier will be used in order to find the level of effect for the mutation based on a universal quantifier table (UQT).

The universal quantifier table takes a dimension (e.g. damage, distance, weight or area) and maps an abstract score to a specific value. E.g. the description of the "laser eye beam" mutation might indicate, that the character can shoot laser beams from his eyes at a range of (4 + MSM), causing (2 + MSM) damage.

MSM here stands for "mutational skill modifier". The two abstract values are mapped to specific dimensions (for an example character with "Mutation Skill: Layer Eye Beams" of 16, garnering an MSM of +2):
Note that I yet have to devise the mappings, but I like the idea that increasing ones mutation skill also increases the power of the mutation. While the formulas might seem complicated at first I probably will provide a couple of tables to easily see which powers a mutation has at which levels. Additionally mutations won't change all the time, so there is little actual calculation required and the current values will be noted on the character sheet. The basic idea behind such a score/value mapping comes from games like DC Heroes (which as far as I know was the first RPG to use that idea) and Torg (which IMHO was the best game to use that approach).

As a side effect I BTW have created a new Mutation skill area for Gaia Gamma, which mutated humans receive for free at rank 1 and sentient plants and altered animals gain for free at rank 2 (see this older post for explanations about skill area ranks).

There is one feeling of doubt left with me, though. Is this too much for an old school game and am I introducing too much modern stuff into the game? Let me know your thoughts and help me to shape the game!