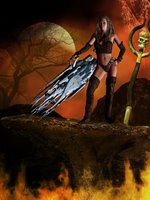 On Grognardia James raised a very interesting point concerning the cover of Gamma World 1st edition: The cover shows a situation that is not possible given the rules provided in the book - a group of pure strain humans with high tech equipment is preparing to explore a ruined city. Such a setup is not possible with the given rules, which IMHO is a shame.

Gaia Gamma has been prepared to handle such things. Since release 3 there has been (a so far empty) chapter titled "Character Background". So far I never elaborated my ideas for this chapter. Now seems to be a very good time.

My idea for this chapter is to provide an additional option to customize characters. I will be using an idea inspired by the character generation process of later editions of Shadowrun: Each PC receives a total of 10 background points (BPs) that can be distributed among several options:
Higher point values in a background category will yield greater benefits and each category can receive between 0 and 4 points. Effectively this should move Gaia Gamma characters out of the rather limited background options effectively supported by the rules of earlier editions. While these editions also allow to "handwave" character backgrounds personally I am a fan of more complete rules systems that give GMs more tools to build a campaign according to his whims.

I also believe that this rather modern approach does not conflict with my goals of creating an OSR game. Although it poses one problem: Character generation probably will take somewhat longer. To compensate for that I probably will also include a random variant of this so that your background options can be determined with a couple of quick die rolls.

I'm currently also not quite happy with the categories mentioned above and suggestions for better / other ones are very welcome! Basically the categories should allow for a wide variety of character options without overpowering individual characters.
Posted by The Creator at 12:01 AM