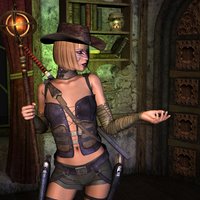 My most recent ideas concerning character classes were running along the lines of strengthening archetypical concepts with skill area specializations (then called talents). I have renamed talents to boons (mostly for abbreviation purposes - a talent level (TL) would have conflicted with a tech level). Now we will have boon levels (BL) which are calculated by an easy formula and specify the detailed effects of boons chosen.

Here is the text from the rules section on boons:


Boons provide special advantages to characters. Boons are only available for skill areas ranked at 1 or 2. In each such skill area the player chooses one boon for his character. Skill areas with rank 1 grant a major boon, those ranked at 2 grant a minor boon. Major boons are more powerful than minor ones and really can shape a character concept, while minor boons usually only provide some flavor.

Each boon has a boon level (BL) that determines the specific advantages granted. The BL for major specialization equals

while minor boons it is equal to

Here is the list of potential boons - you might want to guess there functions (as those are not yet written up - the next release will have more details):

Basically a boon will provide a narrow advantage in some area. A brick e.g. might receive additional hit points equal to (BL)d6+BL. A guide might receive a bonus of +BL to all wilderness skills when leading others through areas that he travelled at least once and his survival skill might be so good that he can provide the upkeep for (BL squared) others. And so on.

My only concern is that character creation slowly starts to get bogged down in details (rolling for attributes, rolling for mutations, selecting skill areas and skills, rolling for skill scores, selecting boons, ...). Maybe this is overkill and I should try to tune things down a little bit.

What do you think? Both about boons and the growing complexity?
Posted by The Creator at 12:06 AM