I'm not sure whether the Ancients ever played a direct role in any Gamma campaign but to me it always seemed pretty obvious that there should be some place in Gaia Gamma, where enclaves of Ancients still survive. Probably even in a pretty unaltered form, sheltered by ancient fortresses from the havoc they caused. Maybe working on rebuilding the world, maybe trying to alter it even more and maybe following some ultimately extremely sinister scheme far beyond the grasp of Gaia Gammas new inhabitants.

In case the Ancients were still surviving in some form I always envision some kind of remote high tech guarded by robots of the latest model series, something like: 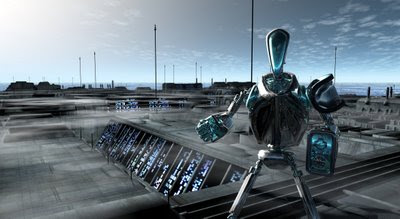 Beings long believed to be eradicated.

Only remaining as a dim memory.

Surviving in the genes of their children, the pure strain humans. 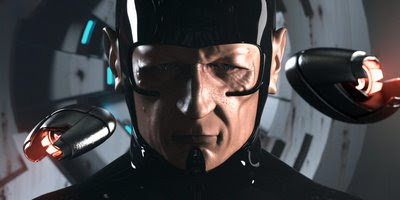 What happens next is truly up to the Mutant Master. But judging from the look of that guy (which I totally love - he is so far from the frail and degenerated scientist you might expect to meet!) he is not overly concerned about a riff raff of pets entering his compound. And probably has some backup guards to discuss things from a position of strength.

Maybe he'll just do away with the intruders, maybe he'll offer them a job as agents for his mission based upon their extreme display of competence of valor, maybe he puts them in a zoo. Or asks them to travel back into time into the last days before the Final War in order to prevent it. Who knows...?

There are endless possibilities and Gaia Gamma will not give a definite answer as I strongly believe that each Mutant Master should decide whether the Ancients are just a story hook or a more active part in his campaigns. In mine there will be something.

How do you feel about the Ancients in a Gamma campaign? Post your thoughts and let me know!