Lores as skills or additional talents? 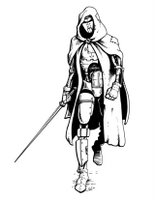 In one of my initial posts on skills, skill areas and character classes roguewombat proposed to use a system of wises inspired by the Mouse Guard RPG. Wises modify the use of other more active skills by providing bonusses in appropriate situations. I have given this some more thought and now have a stance concerning using the approach for Gaia Gamma.

I will use a twofold approach for Gaia Gamma:

Characters will only receive something like two such tagline specializations in order to be able to focus on the core concepts of their characters. I probably also will add some kind of random tables to again speed up character generation. Therefor the tables probably will provide specializations together with tag lines that elaborate the underlying character concept. Background points might help to increase the number of these specializations in some way.

To me this seems like a good compromise between a highly flexible skill system and the kind of background skills first popularized by Shadowrun (as far as I know).

Over the next days I will write down all the things that slowly come together in order to describe a character even better without sacrificing too much speed.