Starting to work on altered animals 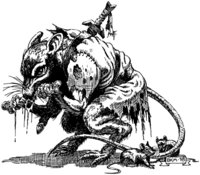 After a week-long hiatus from Gaia Gamma I am slowly recovering from my conference week. While all the evenings of this week again already have been taken by various business appointments I nonetheless slowly will restart my work on Gaia Gamma. At the weekend I procured quite a number of beautiful new images for my RPGs in progress and among them were a decent amount of pictures that depict altered animals. The image to the right is done by Bradley K. McDevitt and it is one of several beautiful pictures I am going to use in Gaia Gamma.
Altered animals to me always have been about choice. I never imagined my Gamma settings with only a few animal genotypes but my campaigns always teemed with a huge number of variant races.

How they were used was a different matter in any case. Usually genotypes were distributed in various ways. Some genotypes just survived as small tribes, others were kind of nations (much smaller than today) with various villages and holdings, some even seemed to exist only in very low and distributed numbers.

But the theme of being able to choose (from the view of a player) was always important to me and I also always felt that altered animal genotypes should feel somewhat different from genotype to genotype. Just stating "you are an altered rhinoceros" wouldn't do it for me without being able to dice for big strength and toughness scores and getting the Horn and Thick Skin mutations as well as the Near-Sighted defect. These details provide the "rules color" to a fascinating genotype.

How the genotypes actually co-exist and behave, what their cultures are and how they view the other races is something that should be left up to the mutant master. The rules IMHO need to provide a framework leaving the detail stuff up to the mutant master so that (s)he can integrate altered animals in any way deemed appropriate into the campaign.

The rules framework for Gaia Gamma will thus provide the following grit:
Additionally the rules will provide some statements on how to handle certain benefits common to all altered animal genotypes:
Thus sums up the post for today and I will close with a short table. Use 1d to determine for your campaign where altered animals stem from originally (which in turn might influence their outlook on the other races of Gaia Gamma):

Altered Animal Origins (roll 1d):
1 - Uplifted by the Ancients as servant and pleasure races. Still feel like lesser beings when facing pure strain humans. Some react with deference, others with violence.
2 - Mutated spontaneously by alien invaders. Their masters have disappeared in the Final Wars but they still feel a latent aggression towards all other species of Gaia Gamma and some harbor the distinct belief that Gaia Gamma is theirs to rule.
3 - Changed by the terrible weapons and mutagens employed in the Final Wars. Confused, insecure about their place in the world and shaky. Altered animals are looking at other species as exemplars o templates for their own destiny.
4 - Evolved by the Ancients as brothers and sisters shortly before the Final Wars. They never managed to achieve their destiny as the Final Wars destroyed everything. Now they are trying to make sense of the plans of the Ancients and view themselves as the last hope for a better future... because what other reason might there have been for the Ancients to create them?
5 - They always have been there. But before the Final Wars they saw no reason to show themselves to the other species. Crazy talk?!? No, don't you think so! The altered animals are the Ancients (or so they believe).
6 - Created by Gaia in order to eradicate earlier follies (especially pure strain humans and mutated humans). The Ancients ravaged Gaia and they need to be punished for it. They need to disappear. Forever. The altered animals are preparing for the very final wars in order to initiate a truly new age on Gaia Gamma.