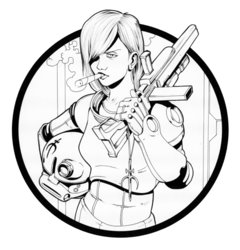 Given recent comments I have given some more thought to Pure Strain Humans (PSHs). There was a concern that PSHs might be overpowered compared to mutants.

I pondered this a bit more and I still feel confident in the approach I started in the character generation outline. In that outline PSHs received the best method for attribute rolling - by far. I have worked a bit more on PSHs and my current design looks like this:

Pure Strain Humans (abbreviated PSH) claim to be the descendants of the Ancients. Pure strain humans (or True Men as they tend to call themselves) are perfect specimen of mankind. Highly resistant to disease, radiation and poison they are completely immune to mutations of any kind. Robots and cyborgs often believe them to be their returned masters and are likely to follow their commands.  Pure strain humans enjoy the following benefits:

So I pumped them even more by also giving them better skill scores. Which actually is something that one might want to discuss... because Gaia Gamma basically is a skill based game with skill areas given a certain class feel. Therefor skills are one of the most important things in the game and while I had absolutely no doubts about it being ok to distribute lots of attribute points to PSHs (as a compensation for not having any special powers at all) I pondered about the skill think quite a bit more.

My current line of reasoning goes like this:
As the skill bonus only increases the average skill score (but not the maximum) I feel pretty confident that this should work out. But it's definitely a point to consider while playtesting.

I BTW have one other gut feeling concerning this thing: Whenever I played Gamma World there was little charm in playing a PSH (no powers, just more hitpoints, etc.). Now that people start wondering if PSHs might be too powerful in Gaia Gamma I feel that I am on the right track. Because IMHO a good character system design shines by wanting you to play each and every type of character and loving them all for their particular strengths. Given that view the challenge now is to make the other races as interesting and compelling to play as PSHs.

What do you think?
Posted by The Creator at 6:40 AM