Designing the back cover for Gaia Gamma

While I wrote my post about "Glimpses from the Glow" I fell even more in love with the apocalyptic picture I posted as a graphical element. I liked that picture right away from the beginning when I first discovered it on www.dreamstime.com but seeing it in combination with the blog colors really touched something in me.

Thus I spontaneously decided to work on the back cover of Gaia Gamma instead of doing another rules post - fickle me :-)

Here we go with the result: 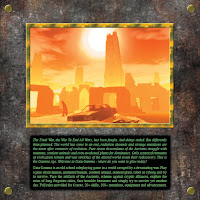 To provide at least a modicum of game content, you also get my first attempt at flavor text for the back cover. Together with a little marketing blurb.


The Final War, the War To End All Wars, has been fought. And things ended. But differently than planned. The world has come to an end, radiation abounds and strange mutations are the norm after centuries of evolution. Pure strain descendants of the Ancients struggle with mutatnts, sentient animals and even awakened plants for dominance. Only scattered remnants of civilization remain and vast stretches of the altered world await their rediscovery. This is the Gamma Age. Welcome to Gaia Gamma - where do you want to glow today?

Gaia Gamma is an old school roleplaying game in a world ravaged by a devastating war. Play a pure strain human, mutanted human, sentient animal, sentient plant, robot or cyborg and try to survive. Face the artifacts of the Ancients, scheme against cryptic alliances, explore the ruins of long forgotten cities, face horrible beastmen and simply try to survive yet another day. Full rules provided for 6 races, 20+ skills, 100+ mutations, equipment and advancement.

Opinions?
Posted by The Creator at 6:49 AM