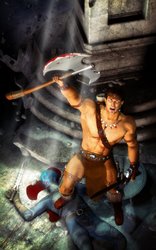 Today I want to spend some thoughts on an outline for character generation in Gaia Gamma. Doing so early in the design process usually gets me moving much faster with the real content sections as it becomes clearer which parts I need to finish to be able to build example characters. Since I would like to introduce a regular series with randomly created characters to this blog, I need to get moving :-) (artwork used under the royality free license of www.dreamstime.com and copyright by Luca Oleastri).
Here's the first outline for a character generation process:


The following steps are required to create a character. If you are a new player you probably should take them in the described order, assisted by the Mutant Master. With more experience you can vary the steps to customize your PC even more. The individual steps are:

The actual roll procedure currently according to my thinking will be handled like this:

a. Pure strain humans roll 4d6-L for each attribute and distribute them as wanted.

c. Sentient animals roll dice as in-dicated by their subspecies.

d. Sentient plants  roll 3d6 for each attribute and distribute the scores as wanted. Toughness is increased by 2d6-L.

And a couple of modifiers will be thrown into the mix.
Some other observations: