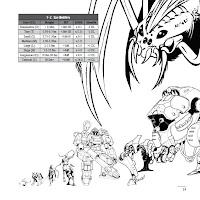 One of the most recent additions to my local copy of Gaia Gamma (next release coming next week) is a short section about the effects of size. It's basically what you would expect: Larger creatures are easier to hit, smaller creatures are harder to hit. But I have made one exception:

I decided that (in contrast to e.g. D&D 3) in melee combat smaller creatures will not get any advantages to hit larger creatures. While this might seem counter-intuitive at first glance my reasoning is the following:

This seems to be a consistent argumentation with recent Hollywood movies where smaller opponents of giant-sized monsters are quite hard-pressed in hitting them because they need to evade their movements all the time.

Otherwise sizes are what you would expect: they are ranged from diminutive, tiny, small, medium, large, huge, gargantuan to collossal (nicely represented in the page sketch displayed above), larger creatures have more hit points and move faster but are far less stealthy. But I also noticed that I need to finish the basics of the game as e.g. the hit point adjustment for smaller creatures seems to be far more dependent on the hit point base line than the adjustment for larger creatures. So I finally should get my act together on these parts to have a solid baseline to discuss. More on that in future posts.
Posted by The Creator at 11:51 PM