Yesterday I introduced the 2dx die rolling method I intend to use for Gaia Gamma. This method provides a numerical range of 1 to 36 with quite a few holes inbetween. Below you find the probability distribution once more: 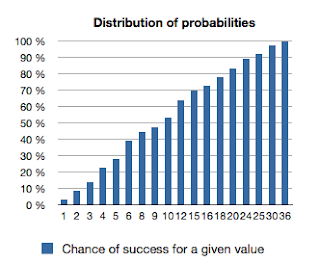 The problem of the holes is that constant difficulty modifiers become hard to apply in a "roll under or equal to" system (my system of choice of Gaia Gamma).


Gaia Gamma will not use any difficulty modifiers for most tests.
The basic idea is:
That's it. Done.

What do you think? Does a game of mutant fun really require anything more difficult? Is this too simple as an approach?

Tomorrow I will blog about solution approach #2 for handling difficulty modifiers (far more traditional and make sure that you read revision 1 of the rules downloadable from the sidebar to the right in order understand the background).