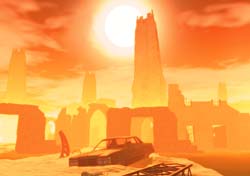 While writing Gaia Gamma is going decently (more on that over the days to come) I read a deeply fascinating and at the same time deeply disturbing article about the effects of radiation.

Considering Fukushima and all that, I sometimes wonder if it's a good idea to try to produce a new "Gamma Game" right now. On the other hand Earth is so big that something bad is happening all the time and becoming stumped by such events probably would mean total stagnation. So I decided to move on.

The "G is for Gamma World" article on the Aldeboran blog pointed me to a magazine article from Outside magazine concerning a visit to the exclusion zone in Chernobyl by writer Henry Shukman actually was fascinating to read as it gives an idea of what might be happening in a real world "Gamma scenario" - given a strongly limited fallout scenario.

The article itself IMHO is highly fascinating and disturbing, probably due to the combination of a seemingly peaceful wilderness and the continuous feel of something very dark and very real lurking beneath the surface. Overall the report feels a bit to "happy" to me but it's worth a read.

To collect such stories I have started a new section called "Glimpses from the Glow" to the right. If you have links to similar articles, let me know.
Posted by The Creator at 6:58 AM