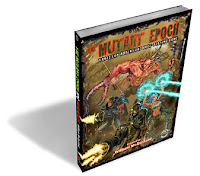 Yesterday Lulu shipped a copy of The Mutant Epoch to me. While it's much too early to give a final judgement about the game I must say that at first glance I am extremely impressed.

The game is 264 pages in length, the pages have a clean layout and although the font is pretty small is extremely readable. Which means: You get a lot of content for your money.

The only thing I so far could not examine more detailed is the actual game system which seems to use a combination of percentile dice and various damage systems (but I might be completely wrong - I just had time to page through the game a little bit). But there are several things that greatly impressed me:
Two features are so-so for me: Character generation is totally random - even skills are diced for. On one hand this exerts a strange fascination on me as the mixture of random race, caste background and then caste-specific skills really makes for very interesting characters. On the other hand the whole manual is so beautifully complete that the omission of a less random character generation system seems strange (or I have only missed it so far). Since this "problem" is easy to fix I won't linger any longer on it.

The second so-so is the hazard table.Hazard checks are rolled against a table on which the appropriate trait is opposed by a hazard level (letter-coded). While the rest of the system is very simple to handle I find the inclusion of a table based check sadly unwieldy. Again nothing to complain about too much as the table easily fits on a GM screen.

These two things just stuck out a little bit as the rest of manual is so damn impressive ;-)

But there is one excelling feature of the game that makes me recommend it as an absolute "must buy", whether you ever are going to play it or not: The number of illustrations is mind-boggling and totally amazing (all done by the author as far as I can see - I bow in amazement). This game is easily the most perfectly illustrated game I ever seen (even if you don't like the art style - it's the first game that manages to visualize everything). As far as I know it's probably the first RPG ever to include an illustration for every important game concept, from races to skills to mutations to weapons to opponents to special situations. Just overwhelming and worth the admission fee alone. Publishers really should take a note here.

As far as I could see about every mutation in the game, most items, every monster, etc. has an illustration of its own. And the illustrations have a great old school feel to me. That alone makes it an incredible resource.

Even the rules at first glance seem to strike a good compromise - some crunch but not too much. At least if my first impression holds. I will try to post a more detailed review in a later issue of Gamma Games.

So - without being able to judge the underlying system - I just can recommend this game as a must buy for inspiration alone. And it might be the "mutant future game to end all discussions"... maybe. But I'll see if Gaia Gamma becomes a worthy competitor ;-)
Posted by The Creator at 1:24 AM